It might seem to the casual observer of the news, that the province of Ontario has gone through one of the worst droughts in recent history, beginning in late spring. The lack of rain has generated a significant amount of discussion in recent months. No doubt, for the worshippers bowing at the feet of the golden calf of man-made climate change, this latest “extreme weather” is simply further evidence of the reality of their alarmist fears. This drought is nothing in comparison to the drought that has been spreading rampantly through our society for over a decade. Yet that drought receives no mention in the news. 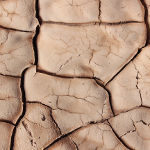 God once spoke to a man named Amos during a time that marked both a high point and a low point in Israel's history. It was a high point, because economically, the northern kingdom was doing well. The royal throne had been established. It was so established, that the northern tribes never experienced the same sort of stability under a single king as they did during the 41-year reign of Jeroboam II, the longest reigning king of the ten tribes. The kingdom experienced a much-needed geographical expansion during Amos's time (II Kings 14:25, 28). That they had been blessed with material wealth is evident in Amos's references to their winter and summer houses, and their houses and beds of ivory (Amos 3:15; Amos 6:4-5).

But the land wallowed in widespread immorality (Amos 2:7-8), idolatry (Amos 3:14; Amos 5:26), and corrupt worship (Amos 4:5). The obedience they owed God, they held back (Amos 2:4; Amos 4:4). They commanded the righteous and the prophets to keep silent (Amos 2:12; Amos 7:12-13). They hated hearing rebuke for their sin (Amos 5:10). The material wealth was simply not an indication of God's approval, but rather a mask hiding the absolute bankrupt spiritual state of the nation.

All of this provides the context for God's dealing with a people who had been given His Word, and had been blessed with His preachers, but had rejected both. Because this wicked nation withheld obedience and honour from God, He withheld rain and blessing from them (Amos 4:6-8). Because they exalted violence and robbery, He promised to send spoilers to rob them of their wealth (Amos 3:11). And because they did everything in their power to silence the voice of the Lord through His prophets and Scriptures, God promised them a famine of magnificent proportions: a famine for hearing the words of the Lord (Amos 8:11).

It doesn't take too much in-depth study to see the same open rebellion against the Lord in our modern society. “Surely,” some might say, “you realize that the Lord is here only speaking to Israel. This can have no application to us.” Just as surely, you realize that the first chapter of Amos promises the visitation of God's judgment upon the sins of all nations, not just Israel, even those nations who were not blessed with Jehovah God's Word, prophets, and preachers. And just as surely, you realize that our society, which has been entrusted with God's Word in our language and God's preachers in pulpits across this nation, cannot escape the effects and application of a similar warning of a drought such as the one promised by Amos to a nation that shortly thereafter was scattered from their inherited land and taken into captivity.

How, though, is our nation experiencing a drought similar to the one promised to the ten tribes? Mega-churches dot the landscape. One cannot flick through the television channels without encountering some form of television preacher. Christian singers receive top-40 acclaim. The Bible is available with ease and is adapted in hundreds of formats to suit your individualistic, self-centred preference. There is no shortage of men and women claiming to speak the words of the Lord. Even politicians will invoke God's name from time to time!

But the famine is real. In the cacophony of words today claiming to sound out “The Word of God” in a manner geared to feed every taste and whim of the hearer, the true words of God are audibly missing.

History has always abounded with self-proclaimed prophets professing to speak the words of God as they assure their wicked generation that the headlong rush to destruction is only an illusion, and that God's blessing resides with them and rests on them. Ahab knew where to find all the lying prophets he needed to assure him of victory in the battle that took his life and scattered his people: “Go up to Ramothgilead, and prosper: for the LORD shall deliver it into the king's hand.” In Jeremiah 23, the Lord warned that the prophets (and preachers) who prophesied peace to the people who despised Him, spoke “a vision of their own heart, and not out of the mouth of the Lord. . . . I have not sent these prophets, yet they ran: I have not spoken to them, yet they prophesied.” Therein lies the drought. The real words of the LORD are according to His written Word, and warn the wicked to turn from their evil ways and their evil doings. The real words of God do not assure the lover of the world that God will accept his corrupt and hypocritical worship (John 4:22-23). The true words of God do not bless the lover of immorality (including the current exaltation of sodomy), nor the idolater, with God's favour and pleasure in their sin, but instead warn those who practice such wickedness of impending judgment and eternal condemnation (I Corinthians 6:9-10), apart from repentance. The true words of God do not assure someone that he can claim heaven while embracing a continued love of this life and of all that the world in its sordid beauty has to offer (I John 2:15-16). The true words of God do not assure someone that as long as they are busy doing things for him, it does not matter whether they are actually obedient to him from the heart (Matthew 7:21-23).

Those real words of God are becoming increasingly scarce. Each year sees a plethora of new translations and paraphrases of Scripture presented to the reading and viewing public, fine-tuned to meet the desires of narrowly defined demographics. New interpretations of Scripture are invented and held out by churches and theologians as previously-undiscovered truth, strengthening the hand of the wicked (Ezekiel 13:22), and yet man is left spiritually hungry and thirsty, while he drinks profusely from broken cisterns that hold no water. The drought grows more severe as the righteous are either forced into silence by the increasing political correctness, or fall into silence themselves as they see the day of evil approaching (Amos 5:13). The churches that pride themselves in their focus on remaining “relevant” alternate between leading the way and following close behind in the efforts to reinvent doctrine in a way that gives people what they want to hear, so that every man can do what is right in his own eyes.

God's Words have not ceased from being sounded out. But they are frequently lost in the volume of words from self-proclaimed and self-sent prophets and preachers who withhold from the masses that God will judge their sin, that God is holy, and that He refuses to accept the corrupt, worldly worship that is offered to him. Thus it is, that in hiding these truths in order to please the masses of sinners who hate the light because their deeds are evil, churches and preachers are withholding the life-giving water of God's Word from those parched sinners who, on the brink of judgment, are suffering from a spiritual famine far greater than has ever been seen in our society.

Man shall not live by bread alone, even though he obsesses daily over its diminishing supply. It is the rightly interpreted and applied Word of God that brings life and sustains it. What folly that man can be so obsessed with a parched and cracking earth, when gaping below his feet is the chasm of eternal damnation and Hell itself! Would to God that society would be alarmed over the real drought!